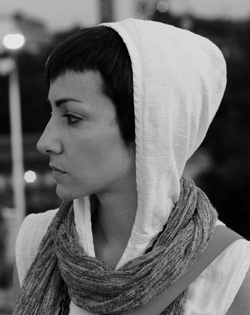 Bojana Tamindžija was born 17 June 1981 in Ljubinje (a small town in demise in Eastern Herzegovina). By trans-Balkans migrations in 1992 she got first to Belgrade and Novi Sad and finally to Nis. In 2004 she returned to her native place to study painting at the Academy of Fine Arts in Trebinje (Republika Srpska, Bosnia and Herzegovina) and completed them successfully in April 2009.

She spent the time from February to October 2008 in Slovenia and Austria owing to scholarships and grants of these countries. She has a crisis of identity, due to permanent moving around / life with a suitcase /. Her emotional and mental belonging is split between the local context of Trebinja and

Nis and is somewhat equivalent to the Balkans post-socialist dissolution. Although she lives with her prime family at her 28th year of age she considers herself a war profiteer because of the benefits of diversity gained though above mentioned migrations.

She defines her work as “work in autistic context”, the context is Balkan and would be only a “context” if Balkan were not autistic by itself.

Preoccupied by reality of her origin she thinks that the only way for her to be accepted is to act in such reality, believing at the same time that the most local and private speech can or should / be understood by everyone and everywhere, if properly interpreted.

HERE. There. Questioning the presence in necessity and isolation / Work in autistic context / installation / 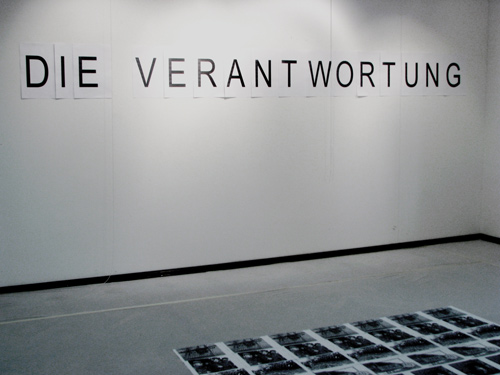 Three-part deconstruction / dismantling / of presence performed in steps that are related to the very way the exhibit is set up, is an attempt to materialise the key issues of identity; actualisation of the issues of presence of external factors in the creation of a personal story and questioning one’s own presence in correlation with the given reality. The only assumed necessity is the one of asking questions. The questions are basic since the identity is being searched for. The correlation with time and space is an attempt to face the specific instead of previous attempts of concealment.

The installation has been set up for the first time in the gallery of the Academy of Fine Arts in Trebinje, which has been transformed from military barracks into an academy by transitional mutations of purpose and meaning. It is a spatial and meaningful determinant within which the work functions as an entity. At the same time it is also its autistic moment that refers not only to geographical isolation, but rather to the isolation of such institution in relation to trends in contemporary arts and culture. The time determinant is the post-socialist, post-war transition moment of the Western Balkans.

The most important steps related to the complete exhibit:

The second step – tamping of the gallery space

The third step – punctuation of the traumatic spots

The basic questions of identity are determined as traumatic spots and by their names refer to the titles by early conceptual artists.

Traumatic spot 1: the national identity from Germanophobia to …

segment name: “The game of what must not be mentioned”

reference to the title: “Zero & Not” , Joseph Kosuth

This is a game with something that equals presence to a show, and the censorship has been downloaded in individual consciousness. Within the plurality of responsibilities to which we refer and take to our account, the very meaning of the word escapes somewhere and instead of doing things, mental or physical activity stemming from the understanding that we are responsible for something, it keeps our relationship more ambivalent. The key word – responsibility – becomes the slogan backed by dormant actors / the responsible ones/.

Bosnia and Herzegovina, which is now a multi-ethnic state, divided into Bosniac, Serb and Croat towns / territories /, and fourteen years after the signing of peace agreement, lives the times of national turmoil and transfer of blame to others. What seems, looking from distance, as an accumulation of the scene in its essence, is in fact, looking at the spot, individual misery of persons struck by the tragedy. What our little countries, isolated from themselves and the world /or in the case of B&H, the entities/ face today, is the responsibility for war crimes. They fall at the expense of the leaders and we gladly leave them therewith.

However, the discomfort we feel every time we see the scenes of crimes committed by members of “our” army against the army of the “enemy” is the echo that calls upon us all individually to question our presence and our share of responsibility in the “hysteria” that has ruled these areas.

There is a slogan on the wall, the inscription DIE VERANTWORTUNG, and photographs, documentation on the facts lye on the floor. Confronting these facts – pictures, not only at the level of nation and at the level of society, but also at the most local – specifically the city – level, always creates a problem; while reading the “slogan”, the inscription – verantwortung – on the wall, the observer stands on the photo-documents. This is the position of self-reflection of the individual and the society, on the platform which is sterile, cleansed, isolated, corked, tamped. While watching the intriguing “slogans” we tread on the reality they refer to.

The concept of this work is designed in a way to be presented in a Serb, a Croat and a Bosniac towns in Bosnia and Herzegovina. The photographs and documents on the floor would testify about the crimes of those people – in Serbian about the Serbian crimes, in Croatian about the Croatian crimes, in Bosniac about the the Bosniac crimes.