Born in 1980 in Rijeka, Croatia. Graduated from the Banja Luka Art Academy (Graphic Art Department) in the class of Branko Miljuš, in 2007.

Since 2006, she has been an active member of the group of artists „Protok” in Banja Luka.

She also works as a costume designer in theatre.

Advices, as a guaranty of universal happiness and traditional (home) educational methods are the basis of my work that is inspired by a specific kind of women’s creativity in this part of the world. My paintings were directly provoked by the so-called „housewives“– the naive embroidery made with “educational” messages. Observing those pieces of handiwork, we can only conclude that women are an inferior species that exists only to please men, to make them happy and to secure their progeny.

My artistic expression relies on this kind of women’s creative work. Through my work, I openly pose the question: What is the position of women artists and women in general?

Women’s issues and women’s themes in the art of Bosnia and Herzegovina are recent phenomena whose appearance is usually related to social and political changes that occurred in the 1990s.

If we observe the recent history, we can see that the image of woman, as an equal participant in the development of socialist society (and, consequently, of art) was offered itself as a solution to the problem of women’s identities, thus enabling a certain departure from tradition. On the other hand, political changes in the post-socialist era were followed by the boom of nationalism, whose important aspect is the return of traditional models in a completely new context that entailed a change in the perception of women’s values.

The new series of Sandra Dukić’s works, under an universally legible title “Pieces of Advice” perceives – in a subtle and tender, almost comic way, the position of women in their families and societies – through complex relations with “the Other”. Usual, stereotypical and unchangeable educational methods have become an exciting theme of the work whose basis lies in the re-examination of women’s identities in view of modern sexist constructions whose consequences have a strong impact on the models and effects of gender roles.

The theme, as well as the material, is approached from different aspects – personal, geographic, sociological, and cultural, thus creating works of art that are in a way a materialisation of traditional social values and traditional women’s roles.

Her works that are exhibited in public – i.e., the gallery – spaces seem to be some kind of forcefully extracted and barren intimacy removed from the walls of private spaces that are primarily dedicated to women, the spaces where women are isolated beings that belong exclusively to their homes, “naturally” adapted to the duties of home and to raising children, while men are assigned to public domain, to business and politics. 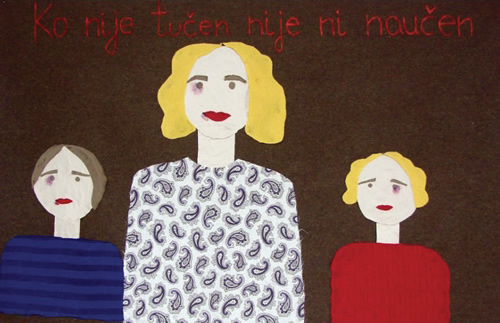 By the choice of material, the technique and realisation that reminds us of handiwork made by young women, and of objects closely linked with home, they emphasize those typically women’s creative (artistic) achievements that were only possible within the patriarchal lifestyle of the Balkans.

By exhibiting her works, Sandra Dukić poses the question of role and place of women artists in the system of art in a society, yet it also relates to the place of women in a broader traditional and cultural context. 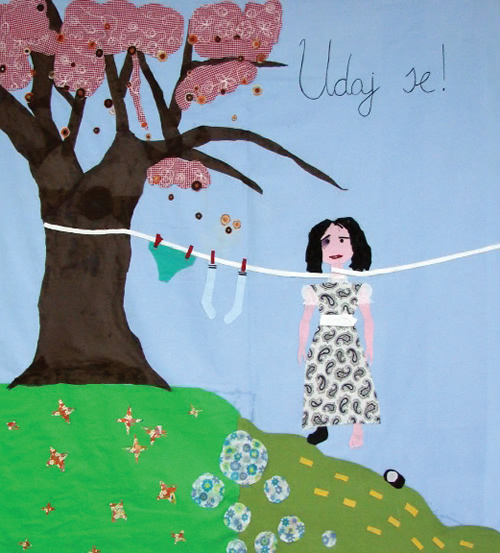