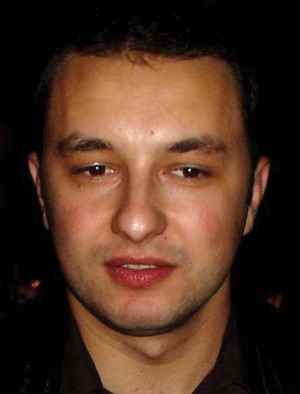 Born in Zenica in 1981, completed the secondary school in Doboj. After the secondary school he attended the Reserve Officer School where he earned the rank of sergeant. As a sergeant he trained 30 privates. After completion of the military term he enrolled at the Academy of Arts (Department of Painting) in Banja Luka. He is the winner of the Rotary Club prize in 2005 for achievements made in his studies and the prize of the Museum of Contemporary Art of the Republic of Srpska for the best works at the annual final exhibition of the Academy of Arts in Banja Luka, 2006. He has participated at several collective shows and art workshops, including “Hello Bing, how’s the brother”, the National Gallery of B&H, Sarajevo, 2005, “Continental Breakfast”, the Museum of Contemporary Art of RS, Banja Luka, 2006.

Miljanović also deals with the social and therapeutic aspects of art, being the initiator of the workshops and colonies for the disabled. He is volunteering in the “Udas” association of the disability persons where he has been in charge of the painting and sculptor workshops for the last three years.

Mladen Miljanović has based his art work upon his own life experience: on one hand it is the experience of growing up during the war and after war in the destroyed, impoverished, ethnically and territorially divided, and externally isolated country; on the other hand it is his formal education (at one stage of his education he attended the Reserve Officer School). The consequences of the war (work with the war invalids) and knowledge gained in the military school (use of senseless military “image vocabulary” in the new, art context), make the basic field of reference of Miljanović’s work as an artist.

Two completely different experiences (attendee of the Military school and student of the Academy of Arts) intercross, by chance, at one spot – after the war Banja Luka University moved into the former Vrbas military barracks. The Academy of Arts is located in one of the barracks buildings. His work in situ arises from the reaction to the physical and functional past of the place, to genius loci. “By making the parallel between the past of the place and its transformation into the diametrically different function today, I take on the role of the mediator in the process of the constructive deconstruction that (the process) is taking place between the two realities.”

Considering his entire engagement, strategy and work methods, it can be concluded that for Miljanović the art is not a goal but the means of confrontation with the negative past and practical affirmation of the attitude “make art, not war”.

“I use art as the means of sublimation of the negative forms of the past, taking performance, installation, image, photograph as media through which the forms of the social trauma are being redefined”.

The participants in the happening “Balkana” (the name of the lake) art workshop are “the disabled persons”, invalids, people belonging to all three ethnical groups who, during the war in B&H, lost parts of their bodies fighting one against other. This group of people represents one of the most susceptible points of the social postwar trauma.

Twelve participants of the “happening” do the creative work during four days. The output is 20 sculptures and paintings. Majority of the participants has no artistic background or experience. Their creative potentials, or discharging of psycho energy, are expressed through fine arts (therapeutic) form. Awareness that their works will be shown in public and that their socializing is conceptually a kind of art colony, which in their opinion, goes into the higher rank of the cultural events, contributes to decrease the tensions among yesterday’s enemies. A new, positive dynamism in their relationship is being shaped during the work, as well as the feeling of anxiety and thrill before the public showing and “proving” their individual, personal creative abilities and outputs.

This space-time event had a double objective: setting interactive relation between the artist-instructor/therapist and the targeted group he works with, and the audience; diverting attention from the social-ethnical differences and directing focus on common destiny and the issue of the handicapped and war-traumatized people on all sides.