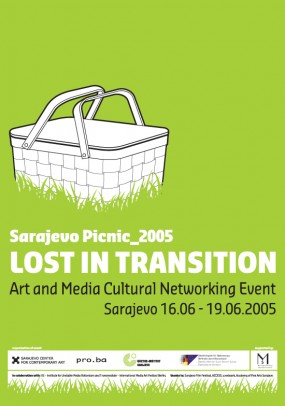 SCCA/pro.ba organised Sarajevo Picnic 2005 LOST IN TRANSITION from 16th to 19th June 2005. It was an artistic and media event of cultural linking of non-governmental organisations and institutions from the region and the whole Europe. Sarajevo Picnic payed attention to art in transition and artistic and cultural practices related to notions of PLACE AND PERSPECTIVE. With its various programmes Sarajevo Picnic stimulated the exchange of ideas and defined European extremes through debates, video screenings, musical performance, presentations of different projects and panel discussions.

During Saturday and Sunday from 10 a.m. at Atmejdan park open discussions were held. The subjects were:”defining cultural territory”, “no borders” and “media in transition”. Sarajevo Picnic is the continuation of the project “Trans-European Picnic: Art and Media in Transition”, by kuda.org/V2_Institute (www.transeuropicnic.org).